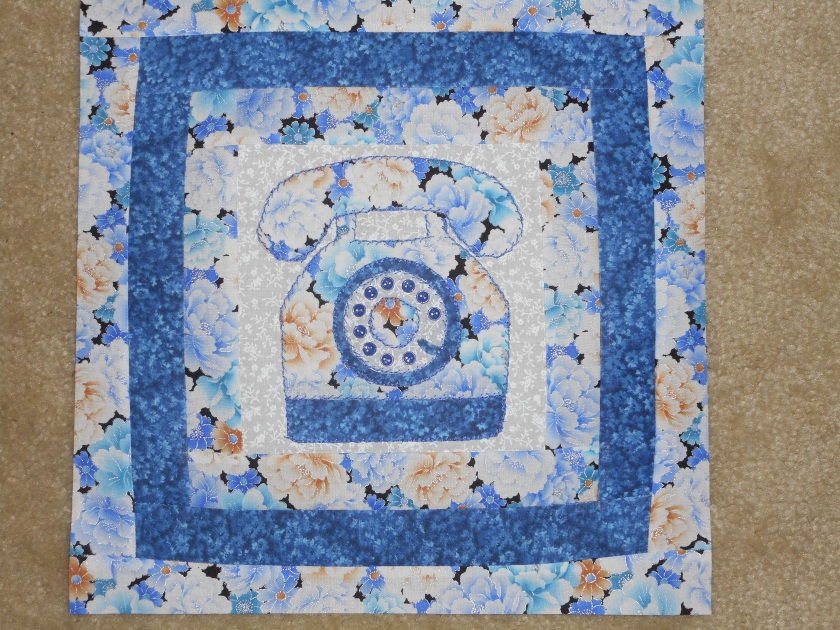 As Sami and I were out-of-town for Thanksgiving I am late finishing block #21 but here it is and it is so cute. I do not have enough contrast between my colors but I am happy with it. As you may guess, this block is called Telephone Time by Pat Sloan.

As neither of my grandparents had telephones my memory comes from my aunt’s phone. We had an old black phone that did not have a dial. When you picked up the phone and clicked the button the operator would ask, “Number please” and would then connect you. I can remember our old phone number (981-W2). We were on an eight party line system and  had a special ring (ours was two short rings) to know which family was to answer the call. We listened when we picked up the phone to make sure someone else was not using it. One lady on our party line would take the phone off the hook when she took her nap during the day and none of the other seven families were able to use the phone until she woke up and replaced the receiver.

At one point my aunt decided the ringing telephone was too annoying so she made arrangements with the phone company that we would not receive calls (or rings) and only have outgoing calls. She kept the phone this way until they finally did away with the party lines and we got a dial phone.

I am a retired grandmother living in hot and sunny Florida. I spend most of my days doing what I love: sewing and quilting. I have a spoiled rotten Boston Terrier named Sami who keeps me busy mostly by cleaning up after her and refilling holes in the yard that she insists on digging and burying her toys. Of course then she digs them up and brings them into the house resulting in...you guessed it...more cleaning. I will be posting pictures of Sami, quilts, flowers, and other things as they come along. Glad to have you join me. View All Posts